Peter Donnelly joined Jeremy Hunt (Secretary of State for Health) and Greg Clarke (Secretary of State for Business, Energy and Industrial Strategy) to launch the UK Life Sciences Sector Deal at an event at No10 Downing Street on 5th December 2017. Peter was on the panel for the event, chaired by Sir John Bell (Regius Professor of Medicine at the University of Oxford and and the lead for the Government on its Life Sciences Strategy).

Peter was joined on the panel by Roger Perlmutter (President of Merck Research Laboratories), Paul Stoffels (CSO, Johnson & Johnson Medical) and Sir Rory Collins (Head of the Nuffield Department of Population Health at the University of Oxford).

Genomics plc is part of the sector deal which was announced at the event by the two Secretaries of State, as the first step to implement the Government’s recently published Life Sciences Industrial Strategy. Speaking in his role as CEO of Genomics plc, Peter said that he was delighted for Genomics to be part of the sector deal, and he explained the massive potential for transformative change in drug development and healthcare delivery by exploiting insights arising from the use of sophisticated analysis of large data resources such as the UK Biobank which combine genomic information on individuals with data on their health outcomes. 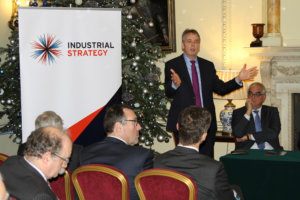 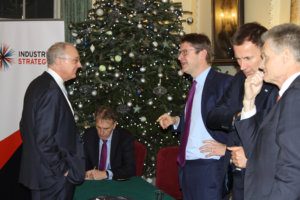